When I first moved to Chicago, I moved to a cheap apartment known as a “4+1,” for four levels of living over one level of parking.  No pets were allowed, but they did allow the tiger fish I had at the time, so it wasn’t a concern. 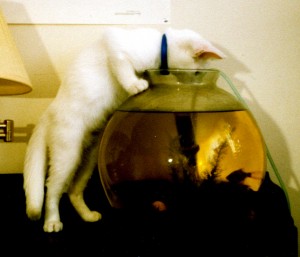 Loot Talks to the Fish

After about a month, my sister-in-law found a stray kitten.  He was tiny, and white, and fresh out of the bath he’d been given.  Every time I spoke, he’d stare at me with the most intense expression of contentment I’d ever seen, on a cat or otherwise.  I decided to take him home.

I’m of the opinion that cats should not have elegant or sophisticated names.  Cats tend to be full of themselves anyway, and a patently ridiculous name can help their humility.  So his name thenceforth was “Loot de Doot Doot,” or just “Loot!” for short, which he’d recognize as his own name when properly yelled for emphasis.

Although Loot never scratched, he did have ear mites when I first got him, and I had to take him to the vet a few times in the first week.  To avoid making it obvious to the management that I had a pet (it was not clear what the consequences would be) I tucked Loot into my backpack, which he actually seemed to enjoy.  On his final trip home from the vet, I stopped to buy a couple of hotdogs from a street vendor, and without thinking, tucked them into the small outer pocket to eat when I got home.  He looked pretty crazy when I let him out, and didn’t want to ride in the backpack after that, though he would occasionally climb in … just in case.

Loot was a source of chaos and a loyal companion, with more of the former.  I returned home from work one day to discover that Loot had emptied an entire economy sized box of tissues, spreading torn tissues all over the floor.  He had managed to cover every visible area of carpet, and sat proudly in the middle of the room so that I could admire his handiwork.  “Now you don’t have to walk all the way to the box if you need a tissue,” he explained, “you can just stop, bend over, and pick one up.”  He seemed genuinely confused why I was not pleased.

I invited a friend from college over for a beer, and in the manner of cats, Loot made himself scarce.  I didn’t think to mention to my friend that I had a cat, until he was sitting on my couch, and Loot leapt up behind him and grabbed his head with both paws. From my angle, I saw an amazingly comical expression of shock and surprise on my friend’s face.  Luckily, no blood had been drawn, because I could not stop laughing.  I actually have not seen him since that day.

On Saint Patrick’s Day, one of the beer companies had a promotion where they topped their beers with little green plastic hats.  We had a few friends over, and we had about a six pack of hats.  One of the party-goers, perhaps me, put one on Loot’s head, and he proudly wore it for hours, holding his head flat, walking around slowly and carefully before ultimately refusing to move for fear it would fall off.  When it inevitably did fall off, he seemed inconsolable until he was distracted — or perhaps 10 seconds.

The apartment itself sucked.  One of Loot’s more useful pursuits was chasing and eating roaches, which I tried to discourage in the event that he was ingesting pesticides, but he did at least seem to keep them at bay by smacking them as they crept out of the baseboards.

My neighbors were insanely loud.  After being woken up again at two in the morning (no easy feat, I am a very heavy sleeper) I visited my upstairs neighbor.  I had to pound on the door, and he answered, apparently oblivious as to both the time and why I would suddenly stop by for a visit.  I was struck by two things.  First, there were moving boxes everywhere, so it was hard to see anything, even furniture.  Second, although loud, his stereo actually seemed a little quieter than it did downstairs in my apartment.

“Come in,” he invited.  We stood among stacks of boxes, since there appeared to be nowhere to sit.

“Did you just move in?” I asked conversationally, since it didn’t appear obvious to him why I’d stopped by in my bathrobe at two in the morning.

“I’ve been here five years,” he said, his expression saying, “what an odd question.”

“Moving out?” I said, trying not to seem too hopeful.

“Well, I’ve come up here because I can hear your stereo in my apartment below yours.  And I don’t just mean that I can make out the words, I mean it’s actually at a higher volume in my bedroom than I’d turn on my stereo if I were listening to my own stereo.”

He pointed between the boxes at his massive speakers.  “Nah, man, I point my speakers at the floor to make them quieter.”  I could see that the speakers were, indeed, lying face down on the floor.

“Where the sound is directed.”

“Look, could you just turn it down so I can sleep?”

“That’s why I put the speakers on the floor.  It makes it quieter.”

“It’s louder downstairs.  Pointing them at the floor makes it quieter up here, but louder down there,” I explained slowly.  “It would be better if you pointed them at you and then turned the volume down.”

He seemed completely baffled by my words.  “But…  Pointing them down makes it quieter.”

Surprisingly, I successfully fought the urge to punch him in the face and managed to talk him into turning the volume down.  Later, I had the same conversation with him about five more times.

Although probably the most obtuse, he certainly wasn’t alone.  On any given night, somebody in the building would either be having a party, have an important drug deal to conduct, or find some excuse to turn their stereo up so loud that it was impossible to sleep.  I wasn’t sure how anybody in the building could sleep, and it didn’t help that the building itself had thin walls and a structure that would resonate with bass.

So without looking back, I decided to move to a nicer place that actually did take pets.  The leases overlapped, so I made sure Loot had enough food and water and spent the night in the new place the first day I could.  After work the next day, I went back to pack up the last of the stuff for the movers, and as I approached the apartment building from the garage underground, I heard an incredibly loud, rhythmic pounding.  “Good riddance to this place,” I thought.  It was louder, in the garage, than it was in my apartment when the tenant above blasted me awake.

As I got off the elevator, the noise was overpowering.  A repetitive beat, but now I could hear a repeating synthesizer melody over the bass.  At about the same time I recognized the tune as being one of the “back up” loops from a cheap Casio synthesizer, I realized the noise was actually coming from my apartment.

The Casio was connected to the only amp I had, which was actually quite powerful and loud.  Loot had managed to turn it all the way up, then step on the right combination of keys to put this horribly cheesy beat into an infinite loop.  Loot sat on the kitchen table, looking quite pleased with himself.

I rushed in and turned it off, leaving the door open.  A woman leaned in, one of my nicer neighbors whom I rarely saw.  She noticed the boxes, and said, “oh, are you moving out?  I’ll miss your little cat.”

“Yes…  What?”  As far as I knew, she had never been in the apartment before, and I’d certainly kept it a secret that I had a cat at all.

“Oh yes, every time somebody comes up the elevators, his little white paws come out under the door, and he talks to us.”

“Oh.  Well, I hope the noise didn’t bother you.  How long was it going, anyway?”

Not one person complained.