Loot de Doot Doot and I moved into a high-rise Streeterville apartment that didn’t have any pet prohibitions.  At one time, it must have had a wonderful view, since one entire wall of the apartment was comprised of glass windows.  By the time I moved in, another building had been built right across the street, blocking all but a sliver of Lake Michigan.  On the plus side, at the right time of day it was possible to see the residents of the building across the street brushing their teeth.

Helping us move were a couple of big guys who did moving on the weekends, one large enough to have to duck to make it through doorways.  There was a microwave on top of our full-sized refrigerator, and he pointed over and asked, “does this go?”  “Sure,” I said, meaning the microwave, and he picked up the refrigerator with the microwave on top, with about as much difficulty as I might have lifting an empty box.  Well, maybe a little less.

Demonstrating his usual good judgment, Loot puffed himself up to as big as his kitteny frame could possibly get, and actually tried to intimidate this man with his size, causing him to raise an eyebrow.  “I think something’s wrong with your cat.” 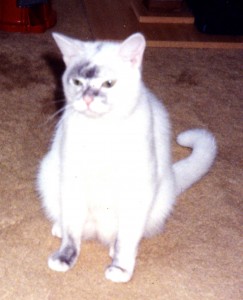 Among Loot’s many fetishes was a deep-seated need to do battle with tissue boxes, usually in the middle of the night, when decent people were nestled in their soft beds, merely dreaming of attacking tissue boxes.  To discourage this wasteful habit, I hit upon the idea of surrounding each tissue box in the apartment with packing tape, face-up, so that a cat would pretty much have to step on it in order to get to the tissue.  It worked — in the morning, the tissue box would still be full, and there was a ball of tape saturated with white hairs.  Each night, I’d do this, and each morning, there would be a sticky ball of tape.  It was a full two years before the tape was actually intact one morning.  (I watched Loot carefully for a few days to make sure he wasn’t sick, but it appears that he actually had managed to learn something.)

Like many other cats, Loot had a knack and desire for unseating potted plants and playing in the dirt.  When caught, Loot would insist that “somebody else” must have knocked over the plant and played in the dirt.  He’d explain away the dirty patches on his normally white fur as being “some kind of genetic thing,” or that maybe “some guy had put dirt on him.”

When we got a little potted cactus, its spines seemed like an ideal Loot-deterrent, and showed all signs of being the first plant that would survive more than a few days in an apartment with Loot.  It took the apparently random deaths of several cacti before we caught Loot in the act:  he would very carefully position his mouth around the spines, and once he was finally in position, poke his teeth into the fleshy part of the cactus.  Then he’d sit and watch the juices run down the plant with the kind of smug expression that only a cat can muster.  Future cacti survived by virtue of getting the tape treatment that ultimately proved successful in protecting my tissue boxes.

For years, I had been receiving anonymous postcards in the mail, with only the words “wish you were here!”  They came from all over the United States, and occasionally, foreign countries, always the same message, but sometimes in different handwriting.  Every time I moved, they would be mailed directly to the correct address, so I reasoned that they must be coming from somebody I knew, but I had no idea who.  About the time I moved, the postcards tapered off, but I started receiving stuff.

Among other things, I received a dozen sets of curiously small ceramic cat salt-and-pepper shakers, a set of steak knives missing a knife (the special instructions in the order indicated that the factory was to remove a knife before shipping,) a cheap electric drum machine with the power supply missing (with instructions not to ship one included on the packing slip), a dozen personalized pens with my name misspelled, three extension cords snipped in half, and a gross of turkey basters.

Whoever was sending these things was purposefully toying with my intense desire for things to work and my equally strong desire not to throw things away.  I tried to use the ceramic kittens.  I tried to locate the missing steak knife, and a power supply for the drum machine, and actually repaired the extension cords, most likely spending more than simply buying extension cords outright.  I couldn’t think of anything to do with 144 turkey basters, but this was close to the number of apartments in the building, so at 2:00 a.m. one morning, I put a turkey baster in front of every door in the building, with a post-it note attached to each one that said, “seems like something you can use!”  They might get thrown out, but a few might actually prove useful, thus assuaging my guilt better than simply throwing away 144 perfectly serviceable turkey basters.

I never did find out who sent my the postcards, or the stuff. 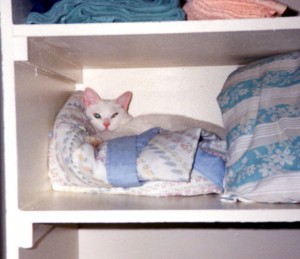 I bought an antique clock that needed some work on the mechanism.  Over the course of about a week, I disassembled the entire thing, and put it all back together, having adjusted every bearing and lever.  I wound it and left it on the coffee table overnight, so see how accurately it could keep time.  In the morning, I discovered that it had stopped some time during the night.  I couldn’t think of a reason in the world why it would stop, and completely disassembled and reassembled the mechanism once again, and it showed no signs of stopping while I watched it.  But the clock wouldn’t run for an entire day, always having stopped some time during the night when I checked it in the morning.

Every few months, I’d work on the clock with similar success, utterly failing to find anything wrong with the clock that would explain its stoppage.  After about a year of this, I happened to be up late, and found Loot sitting near the coffee table, staring at the pendulum.  After a few minutes, he swatted it with his paw until it stopped, and walked away, slowly and self-satisfied.  Yes, it turns out there was absolutely nothing wrong with the clock.

The building management decided to go condo, and had a party at a neighborhood restaurant for the residents to encourage them to buy their own units.  It was a nice party, with beer, blues music, and their own t-shirts.  At the end, they passed around a little survey for residents to provide feedback by putting a tally next to statements they found true.  At the bottom of the page was the statement with the most votes, where somebody had written in, “better than that weird turkey baster promotion.”