A little over 10 years ago, I bought an open-box RCS TX10-B thermostat control unit to replace a TX10 unit.  “Open Box” means it came without any documentation, but it should, in theory, be a drop-in replacement for the TX10 — the “B” designator indicates that it’s capable of reporting status and temperature, unlike the TX10.

Unfortunately, “open box” means it came without any documentation whatsoever.  On the plus side, the wiring is similar to the TX10 (with the additional feature of a physical connection for a “setback switch”) but without knowing the X10 protocol it required, I was left without any means to actually get status reports from the unit.

Using the Internet Wayback Machine to go back to 1998, I located a nifty diagram of the system from Smart Home, from whom I originally purchased the unit.  Ten years ago, it was in the process of being replaced by the TX15-B, a more modern-looking unit — and the only one mentioned on the web site of the manufacturer.

Some experimentation demonstrated that the TX10-B substantially uses the same procotol as the TX15-B, which is documented here.  It doesn’t seem to support the “autosend” feature, nor does it respond to requests for the outdoor temperature, but otherwise, the document appears to be accurate.

The unit uses the venerable TW-523 to communicate, and I was mildly surprised to discover that my TW-523 was capable of receiving, but not sending.  Since the TX10 it was connected to wasn’t capable of sending, either, it may have been defective on the day I bought it, and I’d never have known.

(Yes, it took me 10 years to get around to this project, but now all that’s left to do is the software…)

X10 is an unfortunately-named industry standard for controlling devices (e.g., lights) via low-voltage signals over power lines.  First created in 1975, it has the advantage of having relatively cheap hardware, and although there have been attempts to create a more modern and capable replacement, they have been hampered by high costs — an X10 switch might cost $10 if one shops around, and a Lonworks or Insteon switch might cost $100 or more.  Until the day comes when each outlet in my home is also its own web server, I think I’ll settle for the balance of control and cheapness that X10 provides.

X10 works by adding a 5 volt signal to the powerline’s power, which is then picked up by an X10 device that listens to the embedded command (e.g., turn on, turn off, dim, and so on.)  The problem with this is that various other things plugged into the powerline tend to absorb or attenuate this 5V signal, so by the time it reaches the device which should be listening, it can be too weak to reliably accomplish anything.

The traditional solution is to locate devices that are weakening the X10 signal, and place them behind a filter.  This works pretty well, although it can be tedious to locate the devices responsible, and it’s possible to require a lot of filters for acceptable performance.  An alternative is the installation of a repeater, which listens for the signal and echoes it back to the powerline, presumably closer to whatever device you’re trying to control.  It’s not cheap, and if the signal is weak enough, either the repeater won’t hear the original signal, or the device won’t hear the repeater.  I’ll come back to this problem in a moment.

However, these bulbs have the side effect of attenuating the X10 signal, and built-in lights aren’t candidates for simple plug-in filters.

On the plus side, there’s a device that can overcome this — not by filtering each source of attenuation, but by boosting the X10 signal itself.  It’s called an XTB, or X10 Transmit Booster, and it’s a clever little device that sits between the source of your X10 signals and the power line, intercepting the 5 volt X10 signal and putting out about a 20 volt X10 signal. 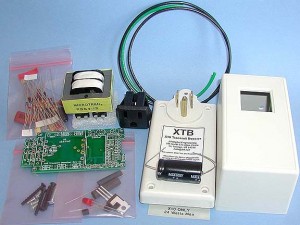 The XTB kit and components

The company — or more accurately, guy — who produces these hasn’t the wads of cash for UL approval, so they’re sold in kit form.  The kit itself is beautifully put together, with excellent instructions.  The trickiest part was a surface-mount op-amp.

When it arrived, I’ll admit to being eager enough to whang the thing together in about half an hour, with the caveat that soldering components is almost second nature to me, and that I probably should have read the part about mounting the LED a little more carefully.  On the plus side, it worked flawlessly.  For those not adept with an iron, it’s possible to have it assembled for you.